FineVu, also known as FineDigital, is one of the leading providers of car electronic systems in Korea. Continuing the success of the GX33 and GX300, we are bringing another FineVu dash cam to North American consumers - the GX1000. The FineVu GX1000 is a 2K QHD front and 2K QHD rear dual-channel dash cam system with the latest AI-integrated FineVu features, such as Damage Detection 2.0, Temperature Monitoring, and Smart Parking 2.0.

Released in the Korean market in December 2022, the GX1000 is FineVu’s latest 2K Front + 2K Rear dual-channel dash cam. While it comes with many of the FineVu features we loved in the previous models, FineVu also introduced a slew of exciting AI-integrated features that make the GX1000 one of the most innovative parking mode dash cams yet.

Discover all the specs and features of the FineVu GX1000 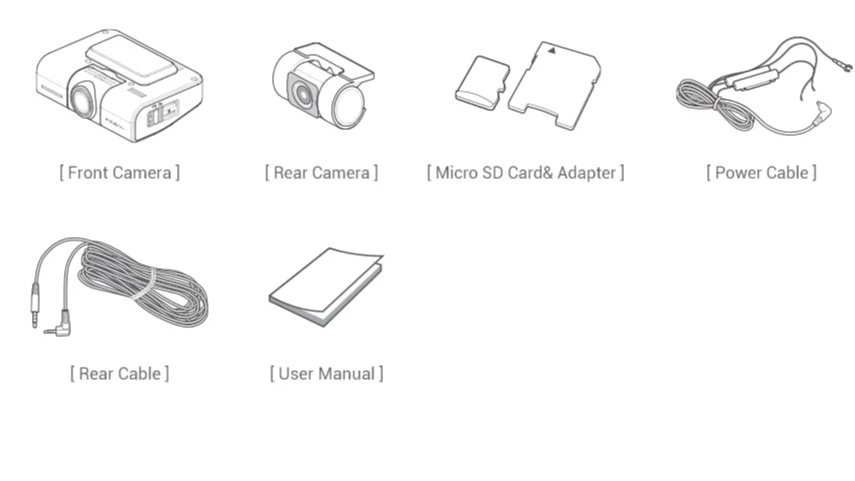 However, you can always leave out the rear-facing camera if you only want to capture the road ahead. Though the GX1000 will detect the rear camera missing and give off an audible alert at startup, you can simply ignore it.

Like the FineVu GX33 and GX300, the FineVu GX1000 doesn’t come with a display screen, which means to review footage, you will need to use the FineVu smartphone app (available for both iOS and Android) or the FineVu desktop player. 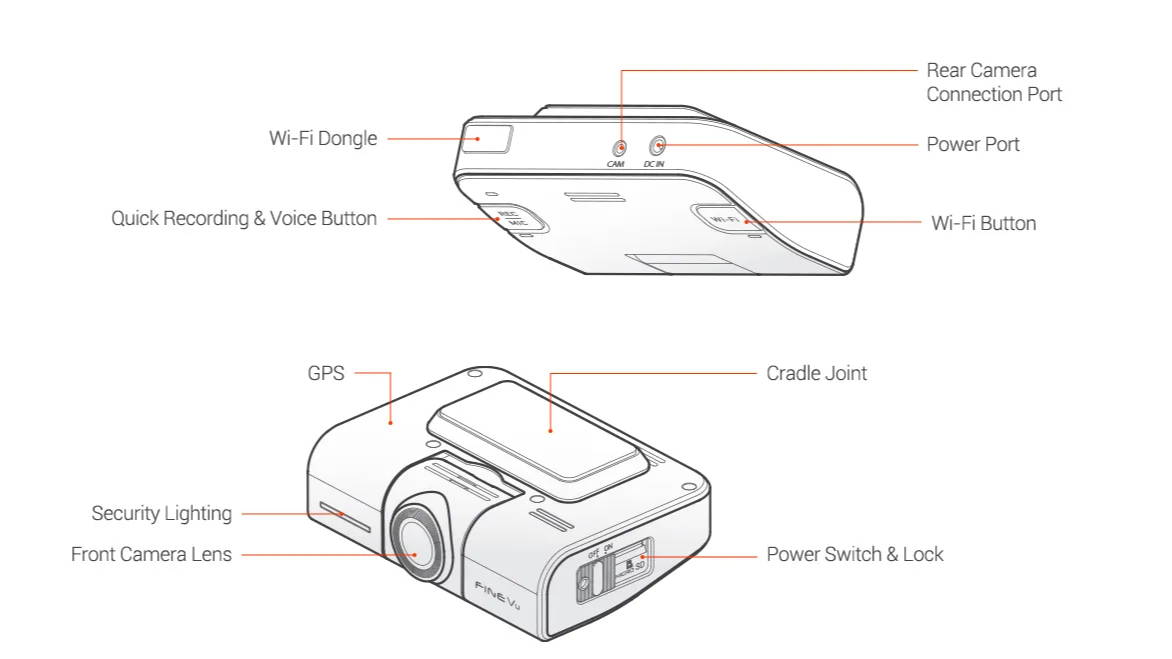 On the front of the camera is a thin strip of security lights. While some people like to have it on as a deterrent, there’s an option in the app to turn it off. On the side of the camera is the power switch and lock. Toggle the switch to ON, doubling as a microSD card lock, so the card is not anywhere while the dash cam is recording.

Moving to the camera's backside, you’ll find the rear camera port, the power port, and the WiFi dongle. The GX1000 is a WiFi-enable dash cam and comes with a mobile app. Flip the dash cam to its underside, and you will find the WiFi button, which you will press whenever you need to access the GX1000 using the mobile app on your smartphone.

The installation process for the FineVu GX1000 is straightforward, and FineVu gives you a hardwiring kit and all the installation accessories inside the box. The FineVu hardwiring kit is a 3-wire cable, so when hooking up to your car’s fuse panel, you will need to find an ACC fuse, a Constant fuse, and a ground bolt.

Suppose you are thinking of getting a dash cam battery pack for your FineVu GX1000. In that case, the dash cam works with the BlackboxMyCar PowerCell 8 battery pack - simply select the Unspliced Power Output Cable option.

Suppose you do not need parking mode recording or are looking for the simplest installation. You can purchase a 12V CLA power cable separately and use your car’s cigarette lighter socket for a plug-and-play solution. But remember that the 12V power option will not give you parking mode capabilities.

The FineVu GX1000 front camera sports the 5.1MP Sony STARVIS IMX335 image sensor and the Allwinner V536 processor to deliver 2K QHD @ 30FPS video recording of the road ahead, which is the same image sensor and processor specs as the GX300. But the video quality from the GX1000 looks significantly better thanks to the higher recording bitrate of 16Mbps (versus the 12Mbps of the GX300).

The FineVu GX1000 comes with FineVu’s Auto Night Vision, which allows you to record clear and balanced video in tough-to-capture environments like nighttime, underground parking lots and tunnels, and very bright daylight - automatically tuning color and clarity for optimal viewing quality. With the FineVu GX1000's highly-enhanced image resolutions, you can capture more details, such as road signs and license plates, which can be used as evidence in unfortunate incidents.

Smart Time Lapse is also available on the GX1000, recording 6fps in Normal Continuous mode and 2fps in Parking mode.

Another area that FineVu significantly improved is the camera’s parking mode recording. Starting with the standard parking mode, which FineVu calls Absolute Parking Mode. It essentially is motion and impact detection with buffered recording. It captures the 10 seconds prior and 10 seconds after the event to give you a 20-second clip of before and after footage - that way, nothing is missed.

If you want to capture everything, then the Smart Time Lapse parking mode records the surroundings continuously at 2fps. If an impact is detected, the GX1000 will automatically switch back to 30FPS, so you get the proper recording.

If you need extended coverage, there’s the Power Saving Parking Mode which allows the GX1000 to cover up to 2325 hours. When an impact has been detected, the GX1000 will capture 20-second footage. Any motion caught after the impact will trigger the GX1000 to continue recording for another 40 seconds. In other words, you won’t get any recordings of the events leading up to the impact, but you will get a minute-long comprehensive capture of the incident. 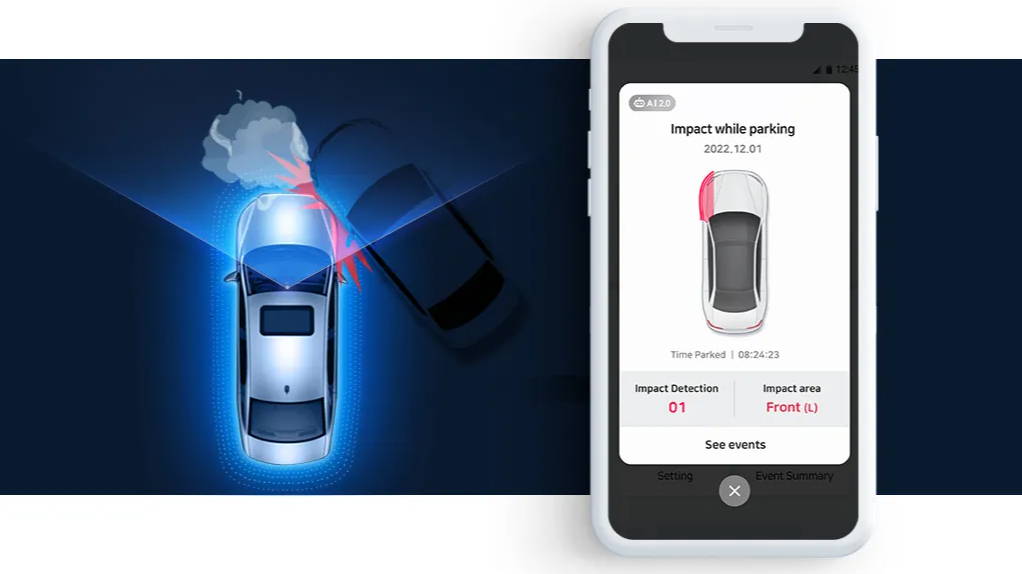 Say you come back to your car and see that it has been hit & run. All you need to do is turn on the GX1000 and connect to it using the FineVu App to check for the AI Damage Detection report. FineVu’s AI Damage Detection 2.0 function will section your car into eight impact zones and categorize the impact on a 3-level scale to give you a detailed account of the incident. It will give you information about where the impact occurred, how strong it was, and the number of impacts detected, say if another car backed into your car repeatedly while attempting to parallel park in front of you.

Another smart parking feature is the AI Smart Parking 2.0, which watches over your parked car and dash cam when the weather starts to heat up, like any typical summer day in Arizona or Texas. FineVu’s Smart Parking’s AI Heat Monitoring automatically switches the FineVu GX1000 from standard or timelapse parking mode to Power Saving Parking Mode. As the dash cam cools down and the temperature lowers, the AI Temperature control will switch the GX1000 back to the original parking mode recording. The Smart Parking Heat Monitoring is a great feature because while other brands will shut down and leave you with no parking monitoring, the FineVu GX1000 will continue to watch over your parked car. 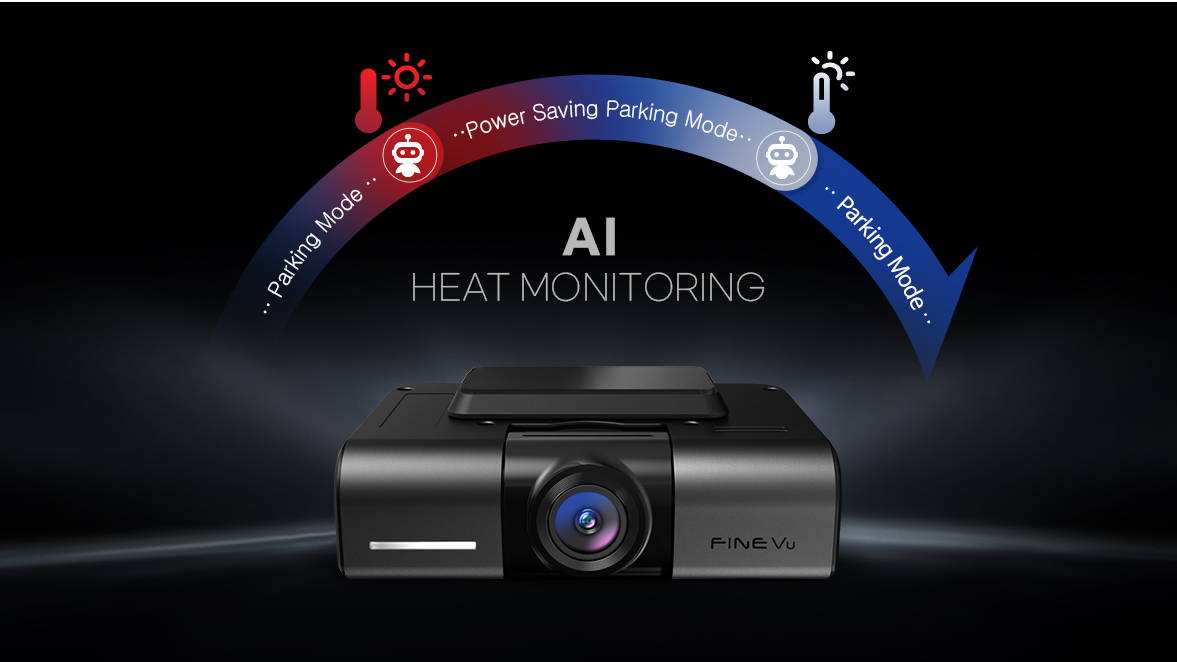 The FineVu GX1000 saves your drive onto the microSD card. Files are recorded in H.264 and saved in AVI format, supporting cards up to 128GB. To transfer the video files off the microSD card, you can either download the files to your smartphone using the FineVu app or plug the microSD card into your computer and use the FineVu Desktop Player to access the footage files.

You can download the FineVu App from the Google Play Store and the Apple Apps Store. Once you’ve installed the app on your phone, you can pair it with your GX1000. 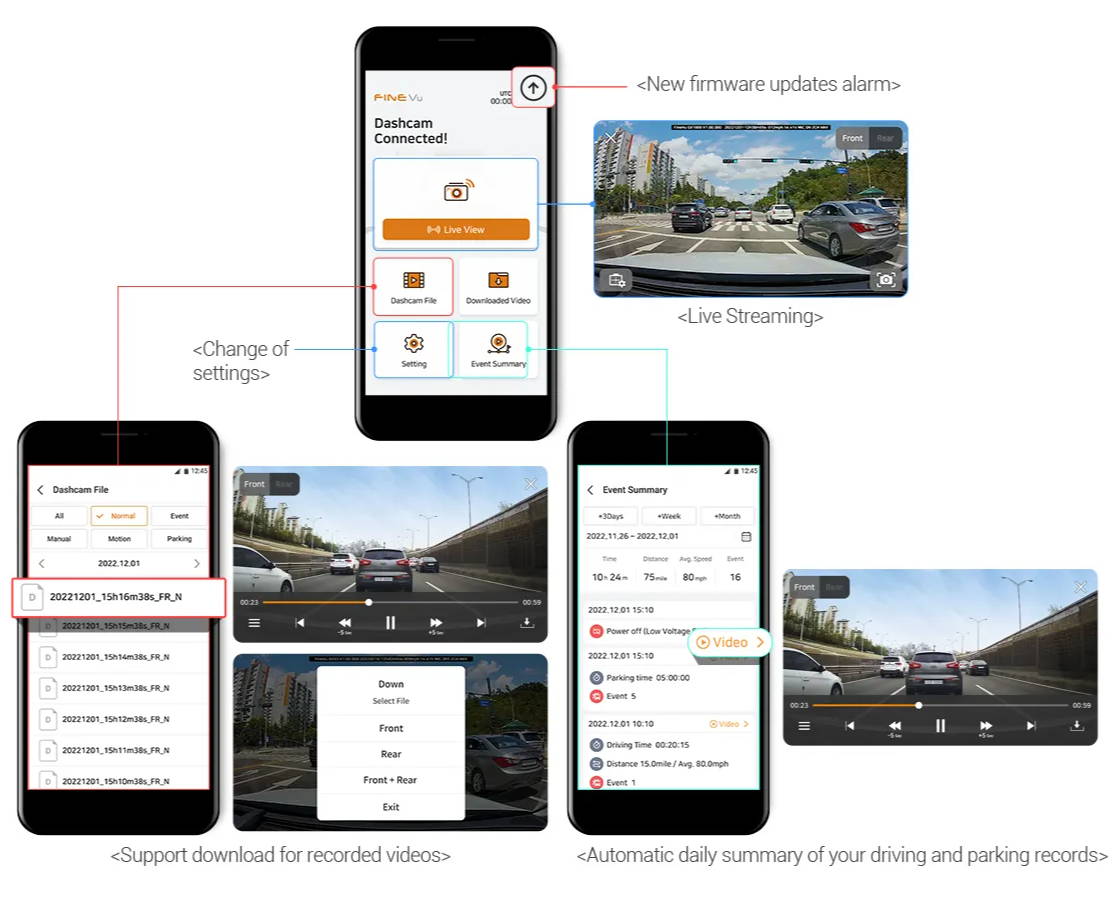 Once you’ve completed the initial pairing, the next time you want to connect to the dash cam, all you need to do is press the WiFi button on the dash cam, and the “Connect Dashcam” button in the app, and the app will automatically reconnect for you. So far, in our tests, connection and reconnection have been problem-free.

You can easily playback your videos, change camera settings, and even update the firmware using the app. The FineVu app is so smart that it even auto-adjusts the language to match the default language setting on your phone. If your phone is set to Spanish, the FineVu app will also auto-adjust to Spanish. The language supported includes English, Spanish, French, German, Polish, Russian, Japanese, Vietnamese, and Korean.

How the FineVu GX1000 Compares to other 2K+2K Dash Cams

There are a few other dash cam systems on the market that offers the same camera specs as the FineVu GX1000. For instance, the VIOFO A229 and the Thinkware Q1000 and X1000.

While the FineVu GX1000 doesn’t offer Cloud features nor does it come with a touchscreen display, it offers unique features that you won’t find in the other 2K+2K models:

In other words, if you’re looking specifically for a Cloud-enabled dash cam, the FineVu GX1000 might not be suitable for you. But if you’re looking for a reliable dual-channel system, especially for parking recording, then the GX1000 is our top recommendation.

Which FineVu Dash Cam is Best for me?

From an investment standpoint, the FineVu GX1000 might not be the most economical choice for a starter dash cam. But it does offer features that you won’t find anywhere else.

The FineVu GX1000 is essentially an upgraded version of the GX300. The front cameras use the Sony STARVIS IMX335 and the Allwinner V536 processor to bring you 2K QHD @ 30FPS with a 122° field of view. But instead of recording at a 12Mbps bitrate, FineVu upgraded the GX1000’s to 16Mbps, which translates to smoother video quality. The FineVu GX1000 rear camera is another area FineVu upgraded - from Full HD camera to 2K QHD.

The addition of the latest AI features makes the FineVu GX1000 one of the market's smartest parking mode dash cams. While FineVu doesn’t offer Cloud features (i.e. auto-backup or real-time notifications), the FineVu GX1000 is more than adequate for any parking situation. 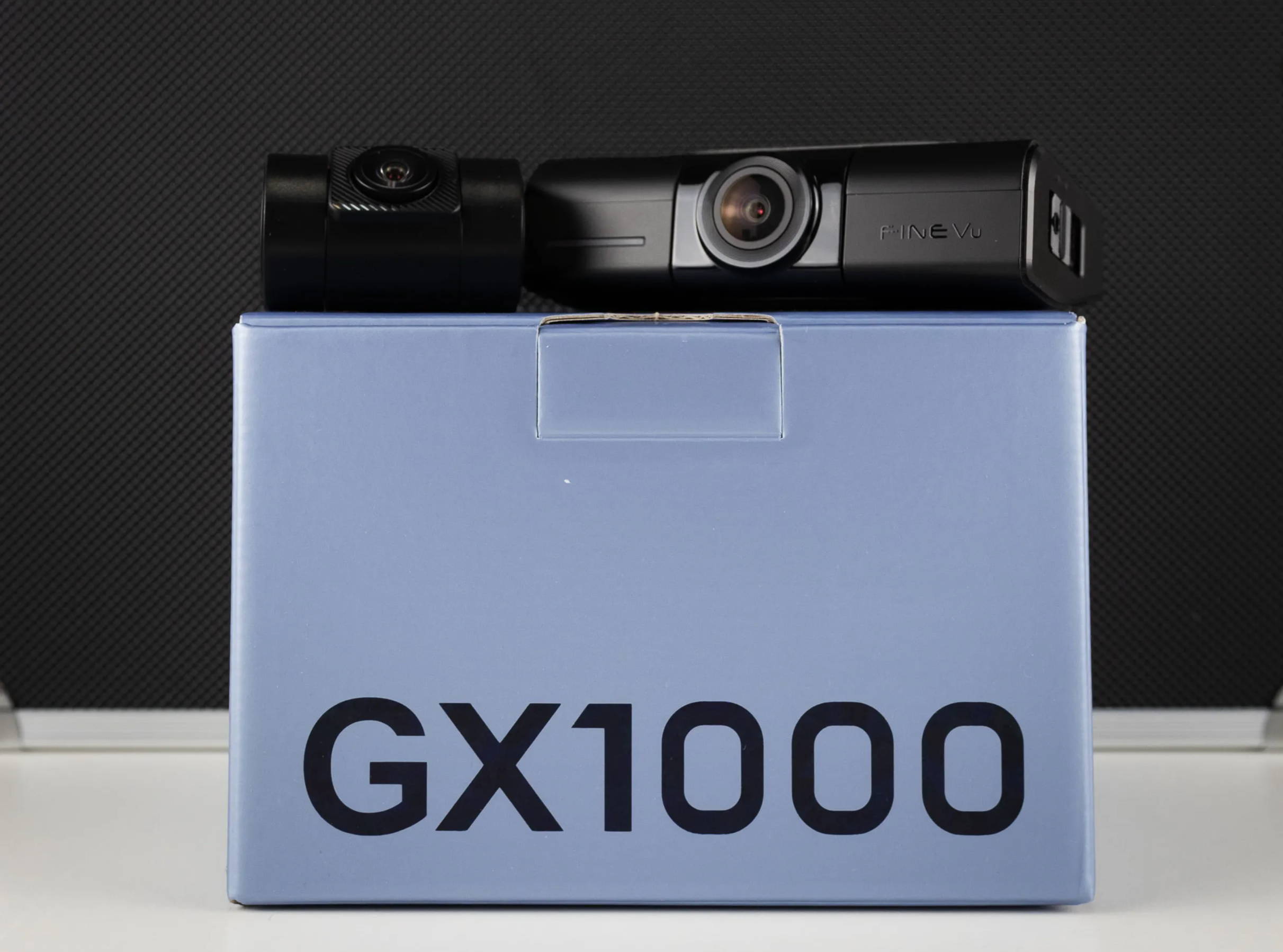