The Thinkware F800 Pro and the BlackVue DR750S-2CH are perhaps the most talked-about dual channel dash cams in the last while. Both of these dash cams are flagship devices made by two of the best-known dash cam manufacturers so it’s not difficult to understand all that buzz and hype. Our team at BlackBoxMyCar was able to test both dash cams before they were released (perks of the job), and we were not surprised to find that both cameras offer similar video resolution and were neck-in-neck in many other aspects. But the end, we thought that the Thinkware F800 Pro was a slightly more desirable system and here’s why. 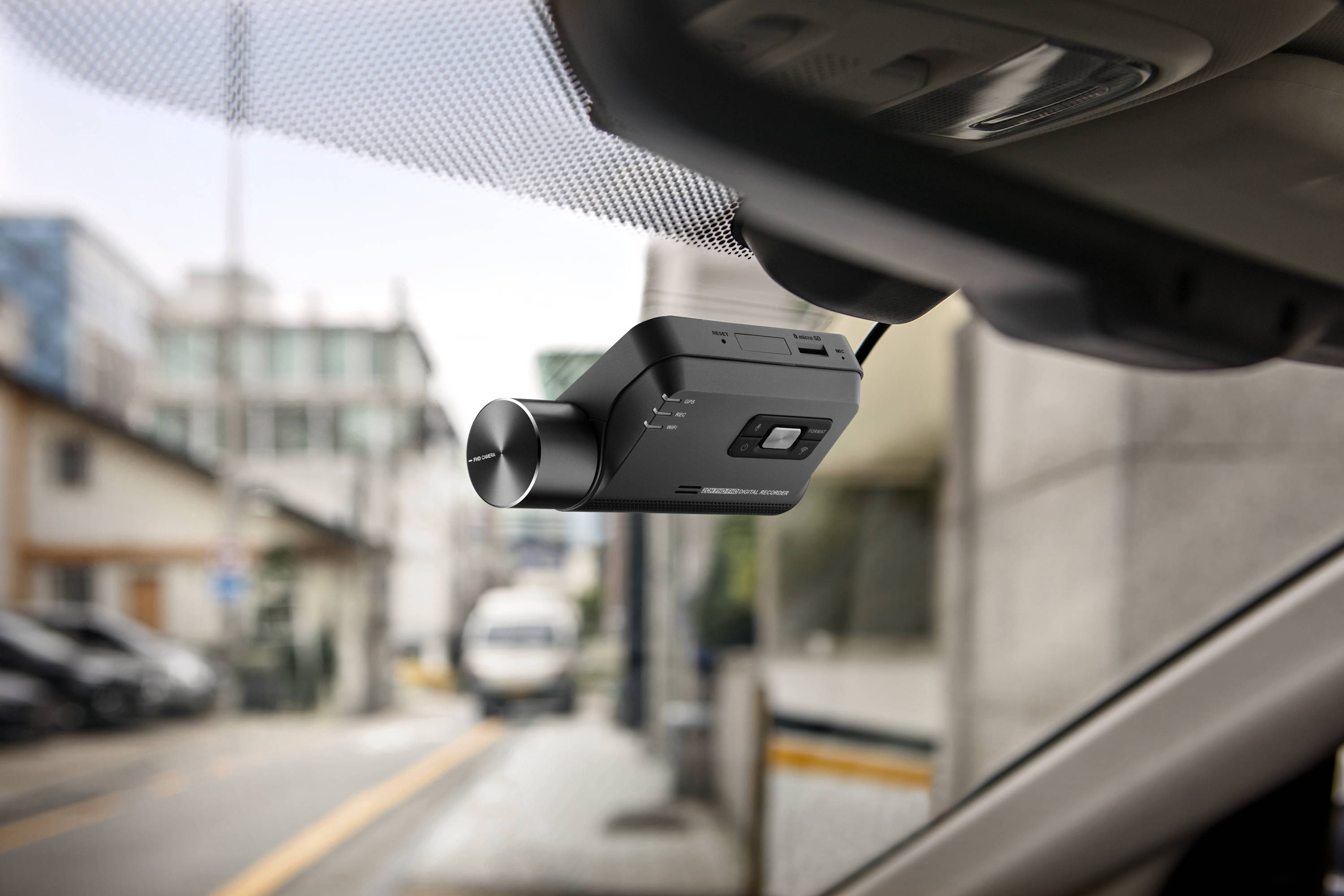 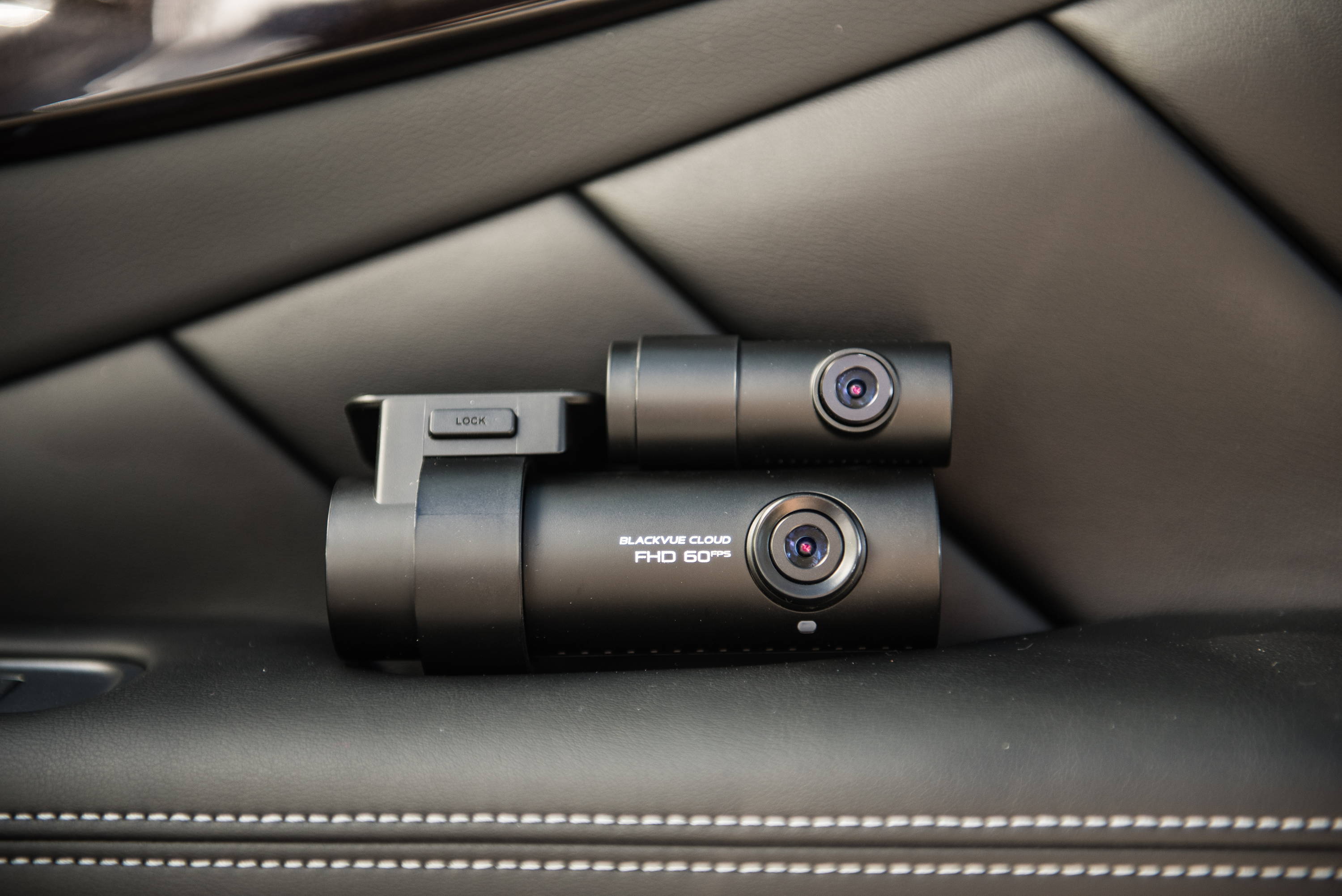 If you have been following the Thinkware dash cams, you would have noticed that the F800Pro’s design is sleek, very different from earlier Thinkware models, allowing it to sit horizontally on the dashboard. The DR750S-2CH, on the other hand, looks more or less the same as its processor, the DR650S-2CH. Comparing the two cameras, the F800Pro has a narrower body and a shorter height, allowing the lens to stick right up against the windshield. The DR750S mount offsets it, making it a bit taller but at the same time, allowing a 360° of rotation. The F800Pro only gives you about 90° of rotation

The F800Pro’s black adhesive and bracket allow it to blend in nicely with the dot matrix design on most vehicle’s windshield, making it incredibly discreet. But if for vehicles with more upright windshields or do not have a dot matrix design, the DR750S will be more discreet.

Another major difference in the design of these two cameras is the user interface. The DR750S has two main controls on the body: a WiFi button on the right and a touch sensor on the left, but both buttons perform more than one task. The WiFi button lets you turn WiFi on and off, as well as format the SD card. The touch sensor lets you control audio recording as well as activate manual recording. The control buttons on the F800Pro are more intuitive as each is individually labeled and unique in its functions.

Video quality is undeniably the first and often the only thing consumers consider when looking for a dash cam. Both the front and rear cameras of the F800 Pro and DR750S are equipped with the Sony STARVIS image sensor. The one difference is with the DR750S, the front camera can record at 60 frames per second. In theory, a recording at 60 frames per second should deliver a smoother playback effect and be able to clearly and crisply pick up license plates when there is a larger speed differential. But this wasn’t the case with our testing.

Check out the sample footage taken with the Thinkware F800 PRO:

Here's the sample footage taken with the BlackVue DR750S-2CH:

Both dash cams offered comparable legibility in the daytime, but the F800 Pro did offer sharper and clearer images at night. The night vision mode on the DR750S in fact did not give the BlackVue camera any advantage. In fact, we noticed images were actually grainer and fuzzier when night vision is enabled. Apparently, this is a known issue with BlackVue and many users have reported better nighttime recording results with night vision disabled. We hope that future firmware refinements and updates will resolve this issue, but as it stands now, the F800 Pro is a stronger low-light performer.

But, in terms of audio quality, the BlackVue is noticeably better than the Thinkware.

Both the F800Pro and the DR750S are WiFi-enabled, allowing you to connect it to your smartphone anytime you need using a mobile app. In other words, you can control every aspect of the dash cam, including initial setup and footage files, without any hassle of removing the SD card. Although you get the additional hotspot feature on the Thinkware, the setup process can be a bit complicated (and frustrating) for many users. You can choose to skip the hotspot setup but be warned about constant prompts reminding you to complete the process. The BlackVue doesn’t have the hotspot feature, making the setup process more straightforward.

Both the Thinkware and BlackVue mobile apps are fairly straightforward, so it all comes down to personal preferences. We prefer the cutoff voltage setting option on the Thinkware app over the unintuitive Power Magic Pro dip switch design on the BlackVue. But we prefer the way BlackVue chronologically sorts video files - with the Thinkware, we had to search each individual folder to find the video we need.

Now, let’s talk about the Cloud features of the cameras. The BlackVue Over the Cloud system is undeniably more advanced than that of Thinkware. After all, BlackVue had a couple more years' time to finetune their cloud system. If Cloud is crucial to you, we recommend the DR750S over the F800Pro for the time being, at least until Thinkware has finalized all its cloud features.

We find that the F800Pro is a better parking mode dash cam than the DR750S. First off, the power consumption on the F800Pro is lower, giving you longer a recording time regardless of whether you are hardwiring the dash cam to your vehicle or running a battery pack. Combine that with the Timelapse Mode and Low Energy Parking options you can further conserve card space and at the same time, get even more recording time.

Third, Thinkware has a better notification system that includes the number of incidents and motion clips recorded whereas the DR750S only tells you if an impact was detected - not very useful considering an impact could be anything from a hit-and-run to as something as simple as you opening the door to get into the parked vehicle.

Finally, the F800Pro gives you the various Super Night Vision 2.0 options, including to activate it only when in Parking Mode. We find this more useful than the all-or-nothing night vision setting on the DR750S as we know that having night vision on all the time can result in overexposure in the recordings.

Overall, we find the Thinkware F800Pro is a better dash cam system, with slightly better performance in terms of parking mode features and video quality, especially at night or low-light environments. But while the BlackVue DR750S came up short in low-light video quality and parking mode integration, their BlackVue Over the Cloud is more advanced and certainly appealing to many users.

From a price-point, the F800Pro is a pricer investment than the BlackVue DR750S. If you like the Thinkware F800Pro but want something with similar performance and features at a lower price point, we recommend giving the Thinkware F800, the standard model, a look (though the Thinkware F800 doesn’t come with any Cloud capability).

As a side note, for those that want the best bang for the buck, we recommend that you consider the the BlackSys CH-200. This dash cam system combines the best of both worlds at a more budget-friendly price. Thanks to the A12 processor and Sony EXMOR sensors, the BlackSys CH-200’s video quality at night is pretty clear without the graininess that we found on the DR750S. It comes with many customization options and offers similar performance at an investment of 15-25% less.